Everybody is busy with Xmas right now. I’m super busy too, but there is nothing about holidays yet :) Here is one of the projects we’ve been working recently. 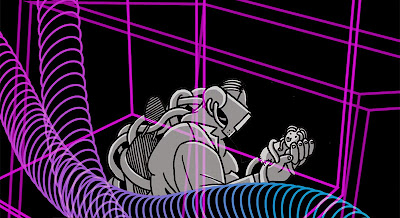 The ‘Happening project’ is another unique and exciting adventure BnB has recently embarked on in which word, image and music beat as one to create a rich mixed-media narrative, inviting their audience to enjoy an explosive ‘mix’ on both physical and metaphysical levels and interact freely with the artists’ and musicians’ works…on a dance floor.

One of the stories for the collaborative music project. The main goal of the project is for the artists of the collective, along with the musicians involved, to produce an epic journey which takes the form of an animated audio-visual installation, or as the eponymous title of the project itself suggests: a ‘Happening’. Once the three different written narratives (inspired from the work of the three musicians involved) were turned into illustrations, they were then animated and merged together into one multi-faceted story in which the musicians would meet and perform to, for and with their public ‘live’.

Here is the first chapter in the story of Otto and Nome.
Story by Mohamed-El-Haddi
Characters by Karl Millet
Graphics and animation by me.

To give an understanding of the whole image I put music as a soundtrack, but the idea is to use this animation with anything similar. Even if the synchronization with the music is not perfect but it works with almost every kind of beat.

Based on created visuals I made a set of transitions to put in-between the stories.

Tatiana
Russian born, London based illustrator and capoeirista. Draw, animate and create... and ask a lot of questions.